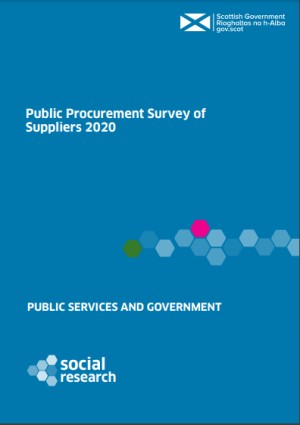 The Scottish Government has published results from its public procurement survey of suppliers. The survey was carried out in late 2020, and was largely promoted by the Public Contracts Scotland and through the Supplier Development Programme.

The data shows that more could be done to improve the visibility of the training, support and advice available to suppliers. When the 62% of respondents who said that neither they nor anyone else in their organisation had received any training, support or advice on tendering were asked why not,18 of 965 respondents, almost three quarters (71%) said that they did not know free tender training was available. Additionally:

Awareness of the Supplier Development Programme

While many suppliers are taking up the opportunities for training, support or advice that are available through the Supplier Development Programme, the findings show that more could be done to promote the programme to ensure that it reaches as many suppliers as possible:

Other Points to Note

There are several points to note within this report on the tendering process, seeking feedback from public sector buyers on tenders, Single Point of Enquiry, sub-contracting experiences and the COVID-19 pandemic. Suppliers and buyers are encouraged to read the survey results in full on the Scottish Government website.

"The survey findings indicate that there is much to be positive about in respect of Scottish public sector procurement and actions undertaken to drive improvement. This is corroborated by evidence published in the latest Ministers’ Activity Report on Procurement. That said, there are clearly areas in which the Scottish public sector could do more. What is already clear is that delivering on our ambition requires a continued emphasis on building the skills and capability of buyers, suppliers and supply chains."

Nick Ford, Director of Scottish Procurement and Property, added: "We are assessing the effectiveness of the steps we have taken to date to identify where we can do more, or, indeed, do things differently to ensure that our aspirations are translated into good practice and performance. This report demonstrates that we are keen to listen and learn from our suppliers’ experiences of public procurement."

Gillian Cameron, Programme Manager, commented: "More than 1,500 suppliers took the time to complete the survey, testament to a widespread desire for continued improvements to public sector procurement that results. We can see clearly that our work has only just begun with building supplier awareness and take-up of free training, support and advice on tendering, in the wake of the pandemic.

"The Supplier Development Programme is led by Scottish local authorities and we look forward to continuing our work supporting public bodies in their tendering processes. We offer Affiliate Membership to public sector bodies that want to meet the Sustainable Procurement Duty and do more to engage the local supply base through aligned tender training opportunities, and are poised to grow with demand should investment in the Programme be expanded in the future."

The results of the supplier survey were announced in a blog from Scottish Procurement.