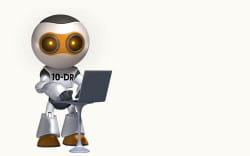 In order to give businesses and other organisations a better understanding of how the MOD lets contracts for works, goods and services, subsidised local bus services, Demand Responsive Transport services and school transport contracts, SDP organised a Talking Tenders webinar on 14 July.

In total, 123 suppliers registered in advance, and 83 attended the webinar. 94% of those that responded to feedback stated that they would recommend this SDP online event to other suppliers.

One supplier said: "Good effort considering the current state of affairs, great this is continuing when we have a bit more time." Another supplier said: "The host was very friendly and welcoming. The guest speakers from the MOD were very knowledgable and delivered the presentation clearly and to the point."

To support the development of its frameworks, SDP organised a "Talking Tenders with NEPO" webinar on 8 September. The webinar included information on current open contract opportunities for over 70 procurement solutions available for use by buyers, across a wide range of categories. Following COVID-19, businesses in Scotland were encouraged to seek new opportunities with NEPO through diversification and possible expansion to deliver opportunities that they may not have previously considered south of the border.

In total, 26 suppliers attended the webinar and 100% of those that responded to a survey stated that they were more likely to bid for public sector contracts after attending. Additionally, 100% of respondents stated that they would recommend this SDP online event to other suppliers.

One supplier commented: "I found the discussion around NEPO's approach to Social Value to be a valuable and insightful one. I have experience with creating and managing Community Benefit (Social Value in Scotland) proposals but limited exposure to the same concept in English tenders." Another supplier (a small business in Fife) said: "We are actively reviewing our approach to the public sector and developing our presence across a number of UK geographies." 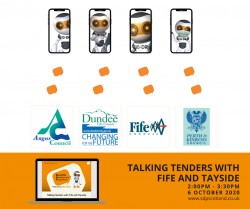 Talking Tenders with Fife and Tayside

To give local suppliers the opportunity to learn more about how to do business with four councils: Fife, Angus, Dundee City and Perth and Kinross, as well as get a snapshot of upcoming tenders, SDP organised a Talking Tenders webinar on 6 October 2020. This webinar event was requested through the work SDP has been taking forward in partnership with Fife and Tayside regionally, to provide a more cohesive approach to sustainable procurement.

In total, 38 suppliers attended the webinar and 85% of those that responded to a survey stated that they were more likely to bid for public sector contracts after attending, and the same amount stated that they would recommend this SDP online event to other suppliers.

One Angus supplier said: "The Angus section was detailed and useful." A supplier from Dundee City said: "It was useful to get contact details and understanding of what each local authority are doing and how to best get my workplace on their supply chain." A supplier from Fife said: "The most useful things were hearing about the level of spend across the councils, understanding the thresholds for the various contract awards, seeing the breakdown of the various councils' buying teams for potential future networking." Finally, one supplier from Perth and Kinross simply said: "It was excellent."

To introduce suppliers to one of SDP's newest member organisations, a Talking Tenders webinar was scheduled with SEPA on 13 October. The webinar aimed to allow suppliers to learn about SEPA, its role and how it spends its budget and understand how its tender processes work.

Overall, 95 suppliers registered to attend and 68 attended the webinar on the day. 88% of suppliers that responded to a survey stated that they were more likely to bid for public sector contracts after attending, and 92% stated that they would recommend this SDP online event to other suppliers.

One supplier from Renfrewshire commented: "Good to know what SEPA are actually looking for." Another supplier said: "It was useful to understand the breakdown of types of suppliers they use and annual spend, as well as the contact details for the SEPA procurement department."

Crown Commercial Service (CCS) is the biggest public procurement organisation in the UK. CCS recently launched a Building Cleaning Services Dynamic Purchasing System (DPS). The DPS is open to all contract cleaning companies, including local and national companies, SMEs and larger companies, single-service and multiple-service providers that wish to have the opportunity to bid for public sector cleaning contracts. It covers the whole of the UK.

Public sector organisations such as schools, councils and charities can use the Building Cleaning Services DPS to procure short-term and long-term cleaning contracts. To support Scottish suppliers to successfully bid for a place on this DPS, the Supplier Development Programme has arranged a free webinar with CCS on Thursday, 12 November for potential suppliers.